by tinyteam on November 12, 2013
One year ago today, Andrew and I woke up in Russia, went to two orphanages that housed our kids, and this time, we didn’t leave empty handed–we broke our babies out of baby jail.
These two, small faces we gathered in our arms and said, “yes, you…”
I felt like I knew them then, but now they are my children, my family, my waking and sleeping, my spilled food, joyful smiles, tiny foot stomping tantrums,  my washing and stooping to sweep up a bit more, of one last light in a pink room sounding out words , my ‘mommy one more kiss,’ my ‘mommy, I won’ rock yous…’
It was just one year ago today that two orphans became a son and a daughter.  Here is our story of that day.

As my daughter snuggles next to me fast asleep, thumb in her mouth, maybe the world’s most perfect day coming to any end, I try my best to find words, but I feel at a loss.  Today is freedom.  Today is love.  Complete.

As joy fills our hearts and our room to the point of no breath, I can’t find words for this day Instead, I will use someone else’s

He has sent me to bind up the brokenhearted,
to proclaim freedom for the captives and release from darkness for the prisoners, to proclaim the year of the Lord’s favor and the day of vengeance of our God, to comfort all who mourn, and provide for those who grieve in Zion—
to bestow on them a crown of beauty instead of ashes, the oil of joy instead of mourning, and a garment of praise instead of a spirit of despair. They will be called oaks of righteousness, a planting of the Lord for the display of his splendor.

His ratty, used, and holey orphanage jammies, that smelled distinctly, were stripped off, new clothes all his own to replace.  We slipped him into his moby wrap, right close to his mommy and this boy had found his home.  I think if we never took him out, he’d be content. When an orphanage worker came up to say goodbye to Elijah, who was snuggled up against his mama, he took one look at her, and he started fussing, crying and rocking himself.  I bounced him a bit, said goodbye and we walked down the hall, he calmed down at once.

Elijah looked up at me, and placed his tiny hand on my chest patting it, smiling up at me.

But before we left, I wanted to take a picture of Elijah’s crib, his home for his entire life up until this moment, this moment of freedom.

And I came to find, that within the 20 minutes of him being gone, his spot had been filled, a new baby in the old bed.
As we began to leave, the babies cried out for us, cried out to me, the mother to them that I can’t be, cried out for a mother that many of them will never receive.

Andrew and I tried to give out some hugs and kisses, we began a feeble prayer for families to be raised up, but we were prodded on, “Hurry!”
And so, for the very last time, we said goodbye.

To the most beautiful children, who deserve so much more.

They screamed for us as we left.

“Hurry, hurry, we must go,” we were instructed, and we wound around down the hard, cement stairwell, normally dark and gloomy, but in this moment, filled with the most beautiful, warm light.

That would forever change the life of the tiniest, sweetest, little boy.

We opened the heavy metal gate, a gust of fresh, cold wind in our faces.  As we walked out, Elijah forever walked out of an orphanage, in the arms of his parents, who love him tenderly, who crossed a wide ocean for him many times, just to call him their own.  Just to shower love on him each and every day of his life.  Just because.

As we drove through city traffic, our little boy, who never made a peep, but smiled up at mama and papa, his eyes growing wide with delight when we would mimic and speak to him, when we would caress his cheek, when we were still there, each time he checked.

After a little while, perfectly nestled warm in his wrap, he brought his thumb up to his mouth, and started to close his eyes, his first time ever falling asleep on a mama, first time ever being comforted and held while falling asleep.  It was in that moment that I felt his weight, not much more than 15 pounds, I felt his little heart, beating against my chest, his breathing rhythmic–here it was, God’s joy and goodness, poured onto us, splashing all around–masked as sacrifice, but oh no, our hidden treasure.

I do believe adoption is a battle, and to free kids from orphanages takes work, and work and work, and if it sounds like I am complaining, I am actually praising God.  Each, and every step of the way.
Nothing will compare to that little beating heart on my chest, the little soul in our arms, freed.

***
We pushed on in our busy day, made two stops and rushed our car into a quick, jerking park in front of Maria’s orphanage.  When she saw us, she gasped, and her legs started running for us.  The other kids saw us, and started hopping around, crowding the car.

These moments that I wanted to savor, were faster than lighting, and in our joy, there were some broken hearts.  The kids reached out for Andrew and I and for Maria, “Mama?” some asked, and dissolved into tears.

“I love you,” I told her, as Andrew unloaded the donations as quickly as possible.

She smiled and nodded, not understanding my English, but happy that someone was talking to her, sweet and kind.

Then it was time for Maria to dress in clothes of her own as well, because they leave every bit of their clothing there, they can take nothing with them. She dressed in her clothes, that she would never have to give back, she grabbed our hands, and forever, forever, left the orphanage, and forever left a fate looming over her head only just a few years away.

We were being pushed into the car by our team so fast, that I couldn’t cry, but it didn’t stop the kids.

Papa, Sveta and Dasha stopped in the bank, and I stayed in the car with the kids.  Maria and I laughed at the cute things Elijah did, we took turns holding him, I did her hair, we played games, we took pictures, then she decided to clean the whole car, organized our explosion of stuff in all the right bags and containers.  She even got under Sveta’s seat and found a water bottle.  (Whaaaat?  How did we do anything to deserve these kids…I’ll never know)

We got back to the hotel, hugged D and S, and had some dinner.  The kids were lovingand I mean loving family dinner time, we were laughing and eating fast, no time for lunch.  We tried to get Elijah to play with his food, but wouldn’t have it just yet.  My husband is a genius and figured out this phone app that you talk into, and it translates and speaks for you in the other language.  We’ve also downloaded 15 English language apps, and Maria can recite full sentences in just one night. Elijah got his first bath, while Papa and Maria played catch upstairs in the game room.  He thought it was the world’s coolest thing, I hope he tells his brother that…

Elijah and I walked up to them laughing and giggling, knocking the ball around the room.

Elijah was so tired by the end of the night, he crashed out with mama and jammies and a blankie, beats a dark crib any day!

***
Then it was time for Maria to check out all of her new stuff we brought for her for this trip.  This girl fits so perfectly into our family, it’s just crazy.  She is so full of life and joy, carefree and fun.
First thing she did with her comfort silkie was try it on!

And we know that in all things God works for the good of those who love him, who have been called according to his purpose. romans8:28.

“Poor thing,” I told Andrew, “I’m going to have to brush and floss for her,” I smiled at him, but she was a great sport, I think she just likes having people who care about her.  I think she likes having a mama and papa.

Well, our hearts are on the verge of exploding with joy like every five minutes, we spend most of our time together giggling and hugging and playing.  Our two sweet children, fast asleep with mama and papa.  I read Maria a bed time story and she put her head on my shoulder and stroked my hair, smiling up at me from time to time, I mean, she’s so joyful she can’t contain herself.

In that wonderful day you will sing: “THANK THE LORD!! PRAISE HIS NAME!!  Tell the nations what he has done.  Let them know how mighty he is!  Sing to the Lord, for he has done wonderful things.  For he is the great one of Israel who lives among you” isaiah 12:4-6

I am leaving out some parts, but I gotta run.  Tomorrow we say goodbye to this wonderful city, and ride a 9 hour flight to Moscow, where we will spend a few days getting the last paper work before heading home.  Is it weird that I can’t wait to fly with these two?  They are such good travelers. (lookin’ at you, Finley)
My babies being sweet to each other 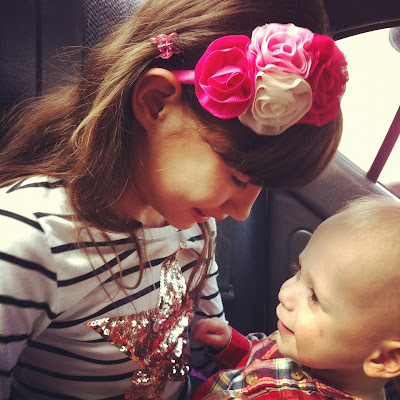 ADOPTION IS REDEMPTION!
HURRAY!
Слава Богу
***
Anyways, not much has changed since that day…

When I read back on this post, I have fond memories, hope.
But I also have anger looking at the other faces of children who desperately wanted out, too.
It’s one thing to care about orphans, another when all of a sudden ‘orphans’ are your kids.  Your own children, your family.
I think mercy and justice say that if it’s not ok for my children, then it’s not ok for any child, a feeling etched deep in our bones.
I am thankful that my two made it out.  And I am thankful to those that helped us.
I want to thank each of you who joined this story.  To this day, we don’t know many of the people who helped these two to come home.  We want to remember all of you on this day, because there is no way we could have done it on our own.
Thank you to everyone who made this happen and had a big piece in our story.
To allow a real, carefree childhood and dancing with mommies and daddies.

Who loves them forever.

Next post: Five Days of Travel with Freshly Adopted Children // After Gotcha Day