The other day I picked up some Yo-Baby yogurt; “Probiotics with green bean and pear inside.”  Holy Smokes, I thought!  What a perfect food to give The Tiny, and I patted myself on the back as I carelessly tossed it into my cart.

“Andrew, you’ll never believe this awesome yogurt I got for The Tiny!”

“Yogurt has a lot of sugar, how much is in it?”  Asked the Sugar Nazi.

“Oh, probably like none, cause it’s for babies.  It’s called yo-baby.”  I replied, rolling my eyes.

“What?  Oh man, but it has good stuff for him…” Me, feeling kind of silly for not reading the label.  I guess that is a lot of sugar.  Flippin’ marketing, got me again!  A baby with a graduation cap was on the side!

“We’ll buy plain yogurt and give him that.”  The Sugar Nazi suggested.

The next day we got a large tub of plain yogurt.  I tasted it and all my taste buds recoiled in tart shock, waiving a white flag of surrender.  We put the yogurt in the food processor with some sweet mango chuncks, and The Tiny happily slurped it down, the Sugar Nazi’s mind put at ease.

Fast forward a few weeks.  Andrew (aka S.N.) was enjoying a tootsie roll pop given to us by our neighbor.  The Tiny was expectedly enthralled the with moving white stick, and his chubby hands moved quickly to capture his prize. Notice the S.N. having a grand time, not thinking anything of their little game.

Until finally, we casually chuckled at those tiny hands holding a lolly-pop.  It seemed so innocent until… {Sorry for the bad quality in this picture, it happened really fast, and there was a lot of commotion…} The S.N. and I were both in shock.  The Tiny in heaven.

But, at least the S.N. didn’t have any hard feelings about it.  In fact, the only one crying was The Tiny as soon as we took that sucker out of his mouth, he knew he had lost something amazing, like something wonderful that he had never had before.  The water works were flowing. 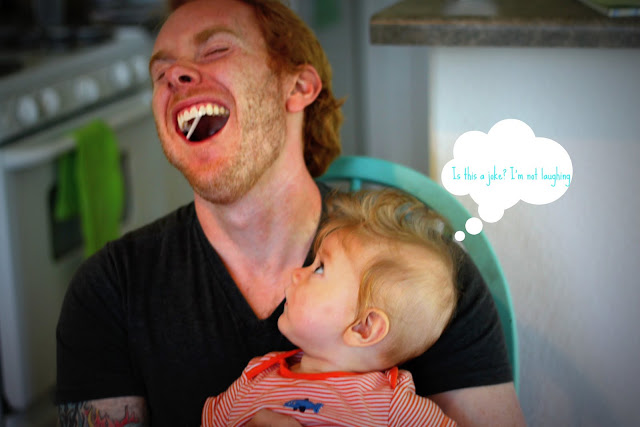 Poor Sugar Nazi, he successfully kept The Tiny from the probiotic yogurt, but couldn’t keep his dimpled fingers from cheap candy.  But, valient effort!