To tell you the truth, I’m a big eater.  I like a lot of lean protein, I honestly could never be a vegetarian even though I love vegetables and tofu.

But, the other night Andrew said he was going to make us dinner.

“YAY! Honey, I’m so excited!  I can’t wait to have what you’re making!” I proclaimed, so excited for a relaxing evening.

“Ok, I’m making Spaghetti Squash,” he said as he got out the large knife to slice it through the middle.

“Mmm, that sounds good, what’s the main dish going to be?” I asked over my shoulder, preoccupied with stacking blocks with The Tiny.

“This is going to be the main dish, you cook it then it gets to be like spaghetti,” he said as he slid the two freshly sliced golden yellow halves of spaghetti squash into the oven.

“Oh,”  I said, not wanting to say anything that would discourage him cooking, but also a little worried about how hungry I can get about dinner.  “Wow, that sounds pretty good…so you just like put pasta sauce on it?”  I said, trying hard to muster a fake warmth in my voice.

“No, I found this recipe for making it Mediterranean style with just some chopped tomatoes, onions and olive oil sauteed,” he said over the sound of him chopping said onions.

“Oh, wow, that sounds so good.  You could also put some pasta sauce on it, I think there is a jar open in the fridge…”   Why does this guy live and put up with me?

“No honey,” he said, with a knowing smile, “I’m following a recipe and I am going to make it like it says.”

book so I at least shut my mouth at one point, even if it should have been earlier.

After baking the gourd, I must admit it was smelling pretty delicious.  He pulled them out and started running a fork through the stringy, steaming flesh that smelled like it had already been buttered. He prepared the sauce with home jarred olives, which I had to force myself from not consuming the whole jar before dinner was ready.  They were fantastic. Once every last piece of the sauce was sauteed to soft perfection and poured over the soft squash strings, we sat down and Andrew blessed our meal.  As we ate, we kept saying, “Wow, this is GOOD!”in between bites.  It was light and filling, warm and hearty, tasting and healthy.
“Andrew!  You have to make this again for us!  This so so delicious, you did such a good job!”  I exclaimed as I finished the last bite, full.
“I think you’re right, so it sounds like you trust my cooking?”  He said, smiling.
“Yes, babe.  You are an amazing cook!”  I said back, hoping I hadn’t done too much damage to his efforts with my worried comments. 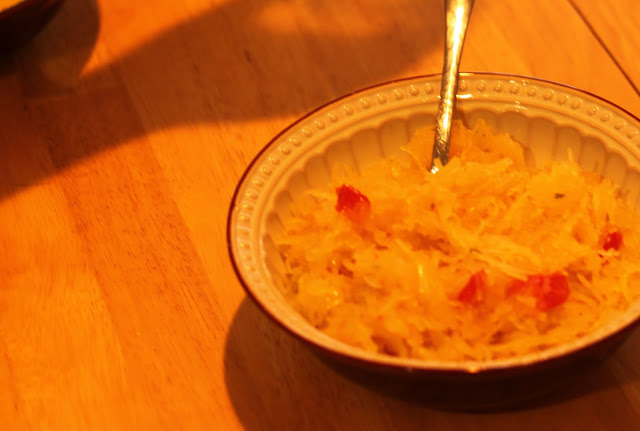 I am still a work in progress, trusting God to grow in me what it takes to be a wife who blesses my husbands’ socks off on the daily. “A good woman is hard to find, and worth far more than diamonds.  Her husband trusts her without reserve, and never has reason to regret it.  Never spiteful, she treats him generously all her life long.” Read more here to be inspired.
So, if you have never had spaghetti squash, get on it!
Andrew’s recipe here